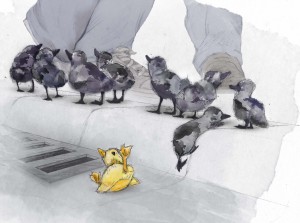 As a child nothing was more exciting than the end of the summer when my grandmother would come back from the UK bringing with her a new book for me. Be it a picture book or just a novel that included illustrations each was just as thrilling as the next. I was always partial to the illustration that came from the UK; the way the artist could give life to a character of such simple form by adding a hint of incompleteness either in the line style or the medium.

I didn’t always know that I wanted to be a children’s book illustrator; I had always found myself too serious for that. It wasn’t until I began examining my childhood inspirations that I discovered my passion. The loose scribbled line work over the flat colors of the original Paddington Bear and Winnie the Pooh influence the work of my characters. Fade away lines and color in the environments of The Tale of Peter Rabbit and vague backgrounds of Sylvia and Bird, consistently find their way into each illustration. Artists such as Peggy Fortnum, Ernest H. Shepard, Beatrix Potter and more recently Catherine Rayner; are among my favorite illustrators still to this day.

In my last year of art school at Pittsburg State University I plunged head first into the world of book illustration. Drawing from the style I so dearly loved as a child, most of my imagery is very precise, even in the sketchy and incomplete areas. Each line is meticulously placed or withheld. I chose which layers and lines to keep and delete as the image evolves, a method more easily done  through my computer than with ink and paper. Though my process is different, the final illustrations still retain the charming qualities of the traditional illustrators that inspire me. My illustrations are clean and sketchy; subtle and dynamic. With sketchy lines and simplistic forms, I delicately depict a story.