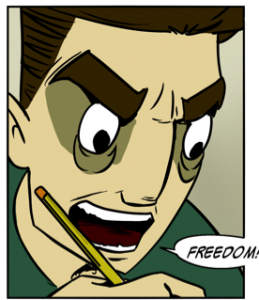 Neither Zach or I are bronies. I think we both agree that the show is of high quality. It’s the quality of other bronies that concerns us, mostly, despite this depiction claiming to represent the standard brony.

The male fans of My Little Pony that I’ve met tend to post horrifying fan-fictions wherein Twilight Sparkle is very intrigued by bondage and right-wing politics. And Jesus God, rule 34. It’s like the people creating this soul-numbing pornography don’t realize that the characters they’re depicting are supposed to be children. Or worse, they realize it completely.

Speaking of things that are completely unrelated, a friend of mine makes these nifty sketch videos. Check out her YouTube channel!